Waihao Chairperson Graeme Lane presented the Glenavy Volunteer Fire Brigade Chief Bevin Joyce with a koha towards the stations new First Response Vehicle. The station has been raising money for a new four wheel drive vehicle and whanau agreed at the last whanau meeting that the Runanga should contribute to this.  The Glenavy Fire Brigade has become just the second in the region to gain its first responder qualification.  Fire chief Bevin Joyce said the brigade attended about 30 or 40 medical calls each year, including a lot of car crashes, as well as general medical incidents.  During the presentation Graeme acknowledge that in the case of a medical emergency at the Marae, the Glenavy fire brigade was most likely to be the first responding unit, and for this reason it was important that the Runanga contribute towards the new response vehicle. 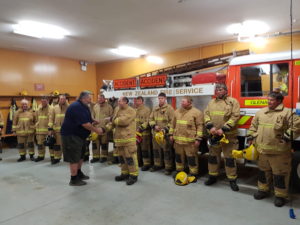