Meridian Energy staff members Jeff Page (Environmental Strategy Manager) and Kelvin Jopson (Station Master) gave Waihao whanau a tour of the Waitaki Power Station.  The tour began with Kelvin  outlining the history on the Station,  which was constructed in 1934 during the depression.  The history of the workers and the creation of the social welfare benefit system resulting from this was an interesting addition to the technical facts around the construction.

Jeff gave an overview of the environmental projects which Meridian and the Runanga  are collaborating in completing, including Trap and Transfer and  Pukaki visitors centre as well as other initiatives.  Jeff and Kelvin explained  how the Elver trap and transfer  work and showed whanau the traps at the base of the dam as part of the tour.

The Runanga would like to thank Meridian Energy for facilitating this very enjoyable and informative day. Check out the gallery for more photos. 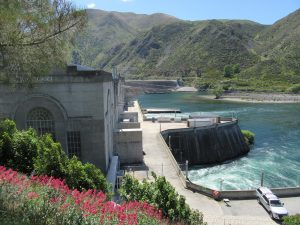